Earning money from YouTube is arguably one of the best methods of making money online in 2020. Thousands of people are earning life-changing income from this popular video sharing platform. In fact, nowadays, most people use YouTube as a search engine.

Meaning, they go to YouTube and type in a phrase or a keyword in the YouTube search box with the hope of getting relevant information. And that’s great news for content creators. Greater demand for information equals to a very huge opportunity for growing an audience and generating significant income on YouTube.

But how much do YouTubers make? Can you really earn money from YouTube?

How Much Do YouTubers Make – The Numbers

How Much Do They Make from Ads on Videos?

Before checking out the income of some of the popular YouTubers, let’s get to know about the factors that affect the overall YouTube ad revenue. The money one makes from his/her YouTube videos depends on a variety of factors.

The topic or niche of the channel, watch time and duration of the video, number of views, audience location, number of ads shown during the video, age group of your audience, etc, etc.

What it means is that there is no definitive answer to the question of how much can you earn from YouTube. Most people end up earning very little. I know people who don’t even earn $100 per month.

And then there are people who are earning upwards of five figures on YouTube every month. Here, when we say earning, we are referring only to the ad revenue and not the income from sponsorships or affiliate commissions.

As we have already mentioned above the money YouTubers make depends on a variety of factors. But the two most important ones are the audience demographics and the topic or the niche of the video. 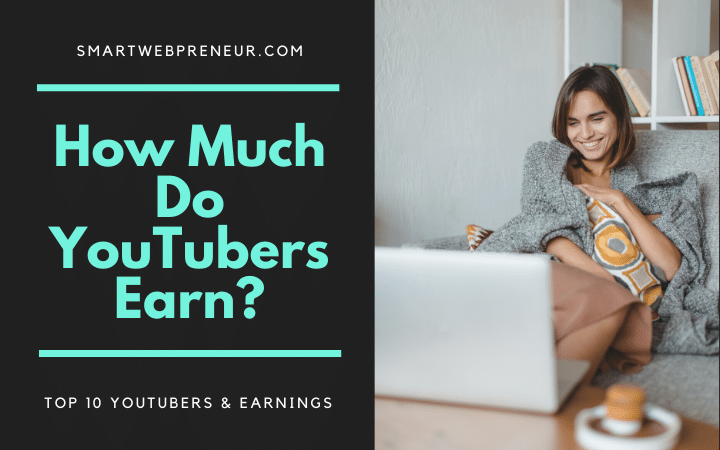 Shelby Church, a famous YouTuber who has millions of subscribers on YouTube, posted a video titled “How Much YouTube Paid Me For My 1,000,000 Viewed Video” where she revealed how much she made from Google Adsense from her YouTube videos with million views or more.

Strangely, she made up to $2000 from one of her YouTube videos with a million views and made only $700 (approximately) from her another video which had more views than the one that earned her $2000 ad revenue. Watch the video below where she shared this secret.

Another YouTuber Marissa Romero shared how much she usually makes from 1000 views in this video titled “How Much Money Does YouTube Pay Me For 1000 Views?”

She regularly vlogs about e-business opportunities and how to make money online kind of videos. I was really surprised to see some very high CPM for her videos. CPM in YouTube terms means ‘Cost per Mille’ or ‘Cost Per Thousand’. Its the price that advertisers are ready to pay you for 1000 views on your YouTube video.

And one more thing. You don’t get the whole CPM numbers converted into your bank balance. YouTube actually takes around 45% of your CPM. For example, if you earn $10 CPM for one of your YouTube videos, YouTube keeps $4.5 from that and pays you the remaining $5.5.

Now, coming back to Marissa Romero, she feels that YouTubers can make a lot more money if they are focussed on a niche rather than just posting videos on random topics. And she presents her own channel as proof.

According to her, big YouTubers may get anywhere between $1-$2 CPM because they have a lot of videos focussing on a variety of topics. Because of this diversity in videos advertisers usually don’t pay a higher CPM even if the channel has millions of subscribers.

Whereas if you take a smaller YouTube channel which is lot focussed and has a very targeted audience, the CPM can be significantly higher. She herself gets a whopping $54.12 CPM for her videos, which is insanely higher when compared to CPM on other bigger YouTube channels. Watch this video below where she reveals her ad revenue numbers.

How Much Do YouTubers Earn from Sponsorships?

Aaron Marino, the author of the channel alpha m. shared that he earns a few thousand dollars from each of his sponsorships. The number he revealed was approximately $15,000.

Jordan Cheyenne, a beauty and lifestyle vlogger says that YouTube influencers are charging around $60,000 for just mentioning the brand in one of their videos. I don’t know what to say. But that’s the rate advertisers are willing to pay you if you have millions of views on your YouTube channel.

According to Jordan, she gets paid around $7000 (the maximum) per sponsorship with $3k being her average earning from sponsored videos. Her sponsorship rates are comparatively lower than the bigger channels because she doesn’t have a huge following like them (at the time of writing this article). Here’s her video.

How Much Can You Earn With Affiliate Marketing On YouTube?

Affiliate marketing is the online business model where you can earn money by promoting other people’s products on the internet. The biggest chunk of total revenue on the YouTube platform is generated by affiliate commissions. This is the primary monetization model for many YouTubers.

But how much do exactly they make from affiliate marketing on YouTube?

I once earned approximately $185 with just one animated video with a robotic voice, and just 30-40 views :-). All I did was, target a very specific buyer keyword which included the term of a product that was recently launched. The product wasn’t very popular so there were not many videos competing with my video.

Lawrence Systems / PC Pickup YouTube channel shared that he made around $20k from the Amazon Affiliate program alone. Popular content creators with millions of followers on YouTube in niches like finance, health and fitness, etc, are banking six figures every year from affiliate commissions alone.

BTW if you want to learn how to make money with affiliate marketing as a beginner, I recommend this training program.

Here is a list of highest paid YouTubers of last year, according to Forbes.